Pulling hot vegan pumpkin brownies out of the oven is one of life’s simple pleasures.

Hearing the oven door creak open, like a secret doorway to an edible treasure, pulling the pan out and seeing that sheet of glistening brown, the aroma of rich chocolate and pumpkin spice wafting in your face, enticing you to forget the cool down time, to damn the costs of cutting yourself a square RIGHT NOW, even if that means you will burn the roof of your mouth and the next few meals you’ll be complaining at the dinner table about how you should have just let them cool but you didn’t.

When I make brownies at my house, I always call for an assistant chef, which usually comes in the form of a child who is nearly 3 ft tall and permanently dressed in only his underwear. He pulls out all the ingredients and I measure them carefully, explaining fractions so I can justify making brownies as an educational activity.

And then he attempts to toss them one by one into the stand mixer. It’s a process that’s only successful about half the time.

The other half of the time, chocolate powder and bits of flour end up dusting my countertop, and I’m pretty sure the salt measurement is off…but that’s ok.

That doesn’t mean we won’t get to the brownies, it just means steps can be messy and prolong the outcome.

But if we stick it out long enough, we will get those brownies. We will get that reward. Even if it means we’re cleaning up after ourselves along the way.

And what’s better than pulling open that creaky oven door to lay your eyes on that enticing tray of heavenly brown squares? It’s an addicts dream.

There’s a secret to making vegan pumpkin brownies, and if you’ll lean in I’ll whisper it gently into your ear.

These brownies are the messiah of the conventional brownie, because they bring in the heavenly taste of pumpkin spice and rich cacao that is like an answer to all your brownie prayers.

Personally, I’ve found that using raw cacao brings a richness to brownies that you just don’t get with regular cocoa. Maybe it’s the way that they process the chocolate, leaving the good parts in tact and not heating the crap out of it. Either way, I love using raw cacao (specifically, Healthworks brand) as a substitute for regular cocoa, and I suggest you try it for these brownies.

The second part of the secret to good vegan brownies is using pumpkin as part of the oil replacement.

Pumpkin makes the brownies moist and cuts down on the oil, a common complaint for many coming to vegan world. Pumpkin also adds a health kick to your brownies, and what better way to justify brownies than with vegetables?

Gotta have my brownies mom so I can get my beta-carotene.

So if you want to limit your oil, get secret vitamins, plus add a texture that almost melts in your mouth it’s so good, try using pumpkin for your brownie batch.

I hope you get a chance to make these pumpkin brownies, preferably with a child assistant for kicks and a lesson in patience.

Just remember to keep the broom nearby. 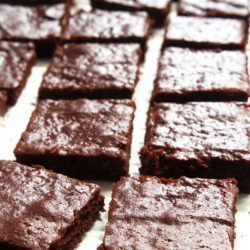 Randi Tisdall
Reward yourself today with these fudgy, moist, and QUICK vegan pumpkin brownies! Taking only 10 min prep and 15 min to bake, these brownies are the MESSIAH of the conventional brownie, because they bring in the heavenly taste of pumpkin spice and rich cacao that is like an answer to all your brownie prayers.
5 from 7 votes
Print Recipe Pin Recipe
Prep Time 10 mins
Cook Time 15 mins
Total Time 25 mins
Course Dessert
Servings 25 mini squares
Calories 95 kcal